Protracted rural displacements: slavery and forced internal migration in Mali and its diaspora

This project aims to uncover the complex intersections of protracted displacements and internal slavery in the Kayes region (Mali) from a longue-durée perspective, to better understand under which socio, economic and political circumstances displacements due to mobilization on slavery may occur. 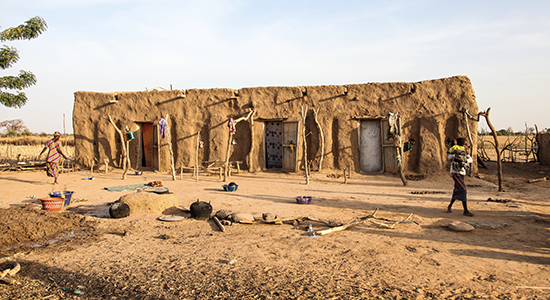 Our project looks at historical and contemporary slavery-related internal displacements in the rural areas of the Kayes region. The displacements mainly concern elders, women and children because most men of these communities are migrants elsewhere in the world.

Introduction of the issue

Since October 2018, more than 1,000 people have been officially displaced in the Kayes region (Mali) to escape violence linked to internal slavery and its legacies: more than 900 refugees are currently hosted in Mambiri, 300 in Diéma and 250 in Konobougou. These forced displacements are represented far less in the media than the tragic internal displacements experienced by many more people from Northern and Central Mali since 2012. This for a number of reasons: 1) the number of internally displaced populations in Kayes is extremely low in comparison; 2) they are only the tip of the iceberg and the slightly more visible part of a far longer-term exodus linked to slavery affecting the region since the beginning of the twentieth century. This form of protracted displacement and forced migration is however largely unknown and unrecognized.

If the latest wave from 2018 cannot be considered protracted displacements as of yet, it seems very likely that they are in-the-making protracted displacements, as previous waves of displacements linked to slavery in the Kayes region have demonstrated (Rodet 2009, 2010, 2015), and because of the lack of governmental recognition and involvement in finding a durable solution for those communities. In a way, these historically and contemporary displaced populations have become a ‘diaspora without a homeland’ (Gaibazzi 2013).

Background of the Kayes crisis

The government’s non-investment in managing the ‘Kayes slavery crisis’ and the incurred forced displacement reflects a longer history of denial of internal slavery in Mali, and more largely in West Africa. Indeed, today the history of internal slavery is still a taboo subject in West Africa (Pelckmans & Hahonou 2011; Lecocq & Hahonou 2015) and the ‘ideology of slavery’ (Lovejoy 1981) remains pervasive. Populations considered of ‘slave descent’ are still discriminated against and stigmatized in Mali, with some even victims of severe exactions. (In Kayes, out of 43 cases presented to the criminal court since 2018, 21 cases of hate crimes related to descent-based slavery have been heard. https://maliactu.net/mali-cour-dassises-de-kayes-43-affaires-criminelles-au-role/ - accessed 15 April 2019)

Postcolonial Mali has never criminalized slavery. The passing of a criminalizing slavery law (the project was ready to be discussed and adopted in parliament in 2016) has been time and again subsumed by other time critical agendas, as well as a general amnesia and fraught political environment which display an inability and/or unwillingness to understand contemporary manifestations of slavery and incurred displacements, which this research seeks to make visible.

Because of this lack of a protecting legal framework, victims of slavery-related violence often have little choice but to escape to more ‘hospitable’ areas, having been systematically barred from land access in their home village by the local elite (De Bruijn & Pelckmans 2005; Rodet 2010). In many cases though, those displaced, mostly agricultural populations continue to live in precarious conditions because of continuing marginalization and stigmatization in new host communities.

This project therefore aims to uncover the complex intersections of protracted displacements and internal slavery in Mali from a longue-durée perspective, of which the 2018 crisis appears to be just the latest development. The longue-durée perspective will allow us to better understand how, why and under which social, economic and political circumstances such crises may occur, despite their regular occurrences in the past 100 years. It is our hypothesis that the local and national government’s neglect and lack of interest in resolving such crises has reinforced the economic and social marginalization of those forcedly displaced communities whose unrecognized situation continues to limit their access to essential resources, notably land, and thus prevent them from living sustainable lives (Camara 2012a/b, 2013, 2014, 2016).

Our research programme thus aims not only to analyse and map the long history of slavery-related protracted fugitive displacements in the Kayes region, but more importantly we propose concrete measures to redress this unacknowledged long-term crisis situation by sensitizing the local and national government in Mali at every level to anticipate and efficiently manage the protracted fugitive displacements of people with ascribed slave status. These measures include advocacy and policy making through national anti-discrimination awareness campaigns and anti-slavery programmes. This will make sure that those communities are not again discriminated against and do not fall back in the traps of poverty and related risks of new forms of exploitation. It is therefore crucial for this project to work alongside civil society and anti-slavery organizations (e.g. Ganbana, RMFP) for raising awareness, both in local schools and among law enforcement officials and local authorities who need to see benefits in fighting against the stigma linked to the ascribed slave status.

We aim at generating a body of mixed methods, ranging from oral history collections to the analysis of written (non-)fiction, storytelling and discourse analysis, which will contribute to reframe qualitative measures and experiences of vulnerability and migration 'from below' in post- slavery societies (Rodet 2009; Pelckmans 2013, 2020; Rossi 2014).

We will work on the systematic mapping of historical and contemporary slavery-related protracted rural displacements, using an interdisciplinary approach combining social and political sciences, humanities and the law and the corresponding methods of analysis in each of these disciplines. Examples are: socio-economic mapping, perception survey and social analysis in each of the communities surveyed, mainly in Mambiri, Diéma and Konobougou, but also in historical villages funded by ‘fugitive slaves’: Bouillagui, Monzona, Zougokora.

In view of the research focus and the proposed conceptual framework, our research questions revolve around:

The project seeks to bridge gaps between research and development practitioners by engaging with local authorities, NGOs, and key stakeholders throughout the course of the project trainings, research dissemination and advocacy at appropriate policy-making levels.

The proposed legal and practical resources will be useful for NGOs and policymakers to plan community-centered and locally informed interventions which place equitable development at their center. All these subprojects will be blueprints and result in recommendations for scale-up and replicability - with limitations - in both similar contexts (e.g. Northern Mali) and at a larger scale (West African Sahel subregion).

The project's impact which encompass both legal and development-focused solutions, which will be facilitated by building on the PI, Co-Is and Malian partners (Donkosira and TEMEDT) long-standing research and engagement with the region under study.